Brazil’s Amazon rainforest fires are spreading in raging record: now more than 2,500 fires currently burning. Carbon emissions are visible from thousands of kilometres away. This is the biggest environmental crisis and we must come together as a collective. The Amazon is the “lungs of the world” – and it’s going up in smoke. This is how your individual contribution can support.

The Amazon is referred to as the “lungs of the planet” and plays a major role in regulating the climate. Effects of damage to the Amazon go far beyond Brazil and its neighbours. The area’s rainforest generates more than 20% of the world’s oxygen and is home to 10% of the world’s known biodiversity. The world would drastically change if the rainforest were to disappear, with impacts on everything from farms to drinking water. Here we give you some context on Why Amazon rainforest fires started, What are the consequences and How we can, together, tackle this massive environmental crisis with our individual actions.

Fires are set deliberately and are an illegal practice, aimed to clear land for farming. The desire for new land for cattle farming has been the main driver of deforestation in the Brazilian Amazon since the 1970s. According to Brazil’s space agency, fires in Brazil increased by 85% in 2019 (with more than half in the Amazon region).

Brazil is now the world’s largest beef exporter: in 2018, these exports generated $6.7 billion for the country’s economy. Brazil is also the second-largest producer of soybeans in the world, and about 80% of the soy grown in the Amazon is used for animal feed. With China’s recent tariffs on US soybeans, China has increased its appetite for soybeans from Brazil.

Since taking office in January, Mr Bolsonaro has railed against the enforcement of environmental regulations in Brazil and announced intentions to develop the Amazon region. Regulations and programs for conservation and traditional communities’ rights have been threatened by economic lobbying. Over the last months, Brazil’s government has announced the reduction and extinction of environmental agencies and commissions, including the body responsible for combating deforestation and fires. All very nasty, and no wonder there’s been direct accusations of provoking fires and encouraging jungle burning for private exploitation of freed land. Bolsonaro has been actively encouraging aggressive economic exploitation of Brazil’s resources – even in protected areas, or those occupied by indigenous people.

Mr Bolsonaro, who once threatened to leave the Paris climate accord, has repeatedly attacked environmental not-for-profit organisations, seen as obstacles in his quest to develop the country’s full economic potential, including in protected areas.

Very recent sources informed about leaked documents show Brazil’s Bolsonaro has grave plans for Amazon rainforest. His government intends to use the Brazilian president’s hate speech to isolate minorities living in the Amazon region. The PowerPoint slides, which democraciaAbierta has seen, also revealed plans to implement predatory projects that could have a devastating environmental impact.

“It is very difficult to have natural fires in the Amazon; it happens but the majority come from the hand of humans” said Mr Moutinho, who has been working in the Amazon forests for nearly 30 years.

Brazilian President Jair Bolsonaro initially said on Tuesday he would reject a roughly $20 million aid package from G7 countries intended to help fight a surge of fires across the Amazon rainforest. He later said that we would accept the offer if French President Emmanuel Macron apologized for criticizing his handling of the fires.

The consequences of land degradation are the reduction of water availability, warms the soil and intensifies drought, combining to make fires more frequent and more fierce.

The devastating loss of biodiversity and Amazonian vegetation directly reduces rain across South America, affecting also other regions of the world. It will have outsized impacts on local plants and animals, as 1 in 10 of all animal species on Earth calls the Amazon home.

The planet is losing an important carbon sink, as the Amazon Basin is critical to help mitigate climate change due to its trees absorbing around a quarter of the CO2 released each year from the burning of fossil fuels.

The Amazon is home to 34 million people, including over 350 indigenous groups. The indigenous folks are people who have for thousands of years made a peaceful living in the Amazon. They are the gatekeepers of Amazonia.

NASA reports that about 3.2 million square kilometres of South America is covered by smoke. This triggers massive consequences for human health.

The Brazilian government has set an ambitious target to stop illegal deforestation and restore 4.8 million hectares of degraded Amazonian land by 2030, but if we can’t stop deforestation and the associated Amazon rainforest fires, it raises real questions about our ability to reach the Paris Agreement to slow climate change. Brazil’s continued inability to stop deforestation has also reduced international funding for conservation. Norway and Germany, by far the largest donors to the Amazon Fund, have suspended their financial support. These international commitments and organisations are likely to exert considerable influence over Brazil to maintain existing commitments and agreements, including restoration targets.

What are the solutions we can tackle as individuals?

The problem is massive and the fires are still active. Here are some ways you can aid in protecting the rainforest, as an individual or as a business:

The Ecocide law is the “mother of all laws” to tackle environmental crisis.

This is the law that could criminalise the 91 large corporations for 78% of emissions worldwide and the destruction of our ecosystem. By becoming an Earth protector at the StopEcocide.Earth you will contribute to moving this law forward. People all over the world have gathered in an unprecedented way. Make your voices being heard when political elections come to your town, country, whenever you are in the world. Ask politicians to incorporate environmental measures and support those programs that do so! We have financial, diplomatic and political tools we know will work to stop the wholesale clearing of the Amazon and now it is time to use them.

There are options such as Noissue, which sources tissue sustainably and its paper is FSC certified. If you purchase sustainable packaging Noissue you will be part of their Eco Packaging Alliance, contributing to global reforestation Donations for the Amazon reforestation:

A GLOBAL FIGHT || The Amazon Rainforest is STILL burning. In fact,  according to Brazil’s National Institute for Space Research (INPE), more than a soccer field’s worth of Amazon forest is falling every minute! ⁣⁣⁣ ⁣⁣⁣ And you guys, this isn’t just a fight for the Amazonian countries. "This," as Carlos Nobre, a climate scientist at the University of Sao Paulo in Brazil shared with the LA Times, “is a global fight.” @latimes ⁣⁣ ⁣ ⁣ (? ?: FYI: if you haven’t checked out @mohsinkazmitakespictures, highly recommend you do that now! #conservationist #naturephotography )⁣⁣⁣ ⁣⁣⁣ The jungle is so rich in biodiversity and trees that it accounts for 6 percent of the oxygen output for the entire planet. @washingtonpost⁣⁣ ⁣⁣ “The Amazon holds about 10 years’ worth of our planet’s carbon dioxide,” writes Shannon Stirone for the Washington Post. “This is the major gift of trees: They give us air to breathe, and in exchange, they serve as banks that hold on to carbon. We keep them alive, they help us keep the ecosystem in check. It’s an agreement we’ve had for millions of years.” ⁣⁣⁣ ⁣⁣⁣ So, what can YOU do about it?⁣⁣⁣ ⁣⁣⁣ Well, according to the @rainforestalliance (+ research I’ve done) here are a few things YOU can do to help:⁣⁣⁣ ⁣⁣⁣ 1. Be a #consciousconsumer taking care to support companies committed to responsible supply chains. Note: Look for products that are certified by the Forest Stewardship Council (FSC) and/or the Rainforest Alliance (RA). ⁣⁣⁣ ⁣⁣⁣ 2. Donate to frontline Amazon Rainforest groups working to defend the forest. ⁣⁣⁣ – @rainforestalliance⁣⁣⁣ – @amazonwatch⁣⁣⁣ – @world_wildlife⁣⁣⁣ ⁣⁣⁣ 3. Make your voices heard. When election time comes, vote for leaders who understand the urgency of our climate crisis and are willing to take bold action. ⁣⁣⁣ ⁣⁣⁣ 4. Switch your web browser to Ecosia — when you search online using Ecosia’s web browser you help plant trees. To date, @ecosia has planted over 65 million trees ?⁣⁣⁣ ⁣⁣⁣ 5. Support organizations such as @Standfortrees which plants trees to help reduce emissions from deforestation & forest degradation and offset our own personal carbon dioxide footprint. ⁣⁣⁣ ⁣⁣⁣ Remember, how and what you consume matters!

What actions have been taken to fight Amazon rainforest fires?

STATEMENT: Today the leaders of Brazil, Ecuador, Colombia, Bolivia, Suriname, & Guyana met about the #AmazonFires and signed the 'Amazon Pact' on joint plans to 'conserve' the Amazon.

Do you have more ideas and solutions to tackle Amazon rainforest fires? Comment below and share them with us, this is important! 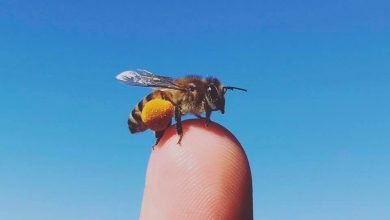 How to save the bees {Ultimate Guide}