The destruction of the Earth is a crime, and we can all agree it should be prosecuted. Polly Higgins has left an incredible legacy that we should take on: Ecocide.

Polly Higgins, the rebel lawyer, the Earth protector, campaigner, and barrister who has spent her career fighting to create the law that would criminalize ecological damage: Ecocide.

Ecocide is a crime against peace, crimes against humanity, genocide, war crimes, and crimes of aggression. No wonder why the young activist and climate leader Greta Thunberg has been nominated to the Nobel Peace Prize.

What is Ecocide law?

Polly Higgins discovered that between 1980 and 1990’s Ecocide was included in the drafting of the Rome Statute (123 states are currently part of it), which is the governing document for the international criminal court and codifies crimes against peace.

In 1996 was decided that Ecocide wouldn’t become law. The ecocide law would have avoided oil extraction, deforestation, destruction of natural resources. One of Polly’s discoveries based on her research is that 91 large companies are responsible for 78% of emissions worldwide.

What is the legal framework that is avoiding Ecocide to become a law?

Imagine for a second justice is a pyramid. On the bottom we have soft law, in the middle, we have civil law, and on the top, we find criminal law. Basically, under this second tier camouflaged as litigation CEO’s of large corporations are making loads of profit out of something that causes harm. They are being advised by lawyers just like Polly Higgins, as to what they can do and what the consequences are if someone tries to chase you.

Here’s the deal: you are a CEO of a mining company, a lawyer will advise that “in law, yes you can” because it is lawful.

“Can we pollute the waterways?”

“You are not supposed to.”

“What happens if we do?”

“Well, the community are going to take action against you.

But you can stretch that up to 10 years and you will have to pay a fine.”

They have so much money that they don’t care if they have to pay a fine, by then they would have made heaps of money.

An easy example, if you are being attacked and hit in your head, you don’t have to sue those who have caused the damage, because the state would chase them since it is there to protect you. Criminal law is established for states to takes action on your behalf.

The key difference between if someone hits you in the head versus a company contaminating our waterways, for instance, is that damaging our environment is considered civil law. Hence, the state is not stepping in to prosecute the company that is causing pollution and it has to be made by the community. Even worse, if the suing is going to occur, it’s the company that will be sued, not the individuals making the decisions.

This is crazy: once we sue the company and is forced to close, what do you think CEO’s or business owners will do next? Open a new company, with a different name, continue the damage and probably maintain their clients and connections. Ten years later, all over again.

The point is that only when you take climate legislation to the top tier is when you are dealing with justice and you criminalise that harm. The Ecocide law would reframe as illegal any environmental damaging actions and be supported by enforcement mechanisms to criminalise individuals.

This is when the state has a legal duty to act on the behalf of its public, to safeguard and protect its health and wellbeing and not just the public but ecology of society and the Earth itself.

What does it take to move the Ecocide law forward?

As for Polly Higgins understanding, implementing the Ecocide law is actually very simple and straight forward. It would only take an amendment of the Rome Statute, which currently recognises the genocide, war crimes, crimes against humanity, crimes of aggression. To the bottom, we just need to add “Ecocide” 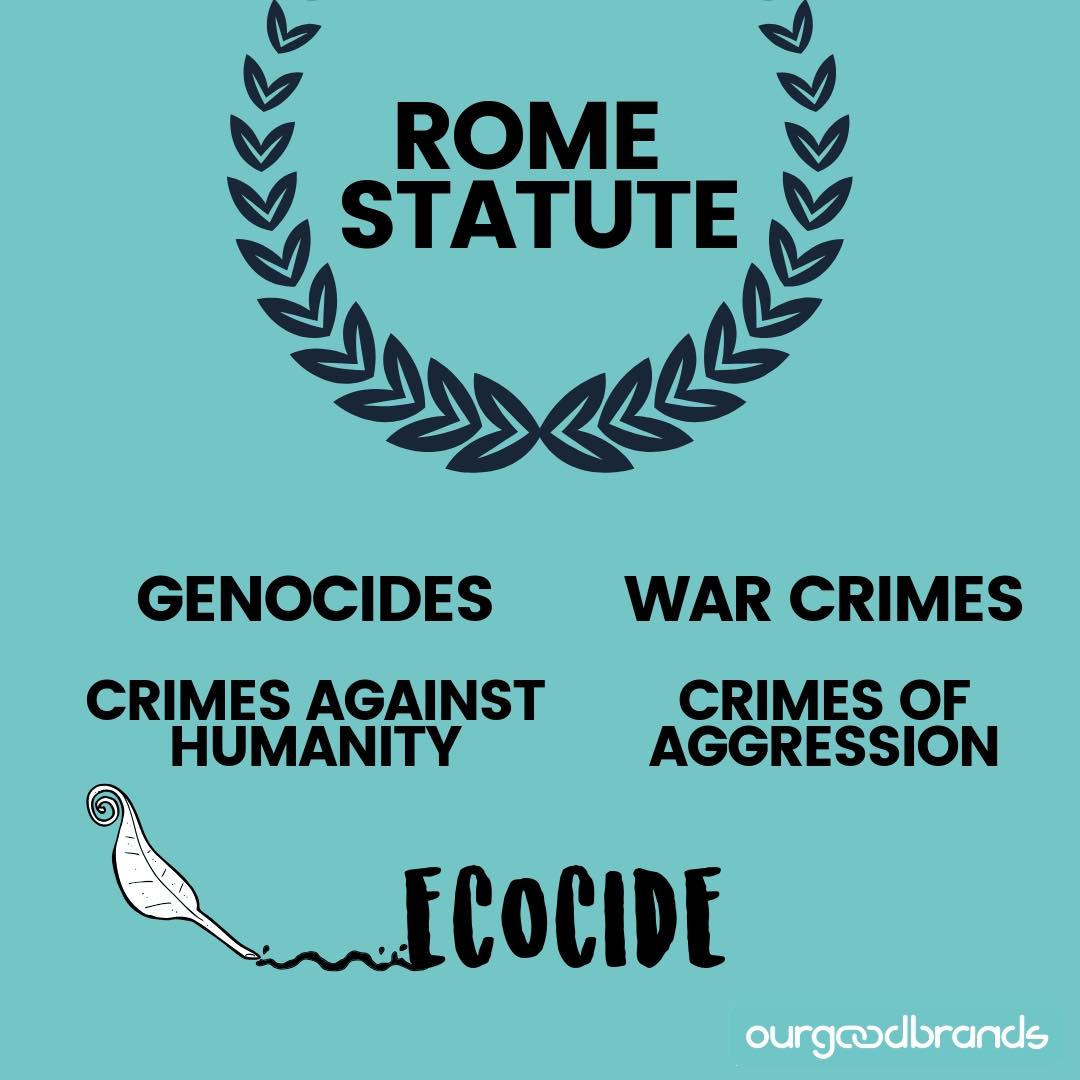 Including the Ecocide law would impose international legislation, so that it automatically becomes an international crime. And applying universal jurisdictional principles what it means is that the enforcement can be used even if it’s not happening in your country.

Polly Higgins team is currently working with a number of small states around the Equatorial belt (the most affected countries by the environmental damage). These states can take forward the proposal of Ecocide as an international crime into the international criminal court – because they have the legal standing to do that, while petitions don’t.

“Yet, these tiny underdeveloped states has one thing that prevents them from taking this law forward: and that is finance. For them to get a seat to the table, it requires them to actually pay to take delegates to New York.” explains Polly Higgins.

To overcome this, people all over the world have gathered in an unprecedented way that is never been done before. At the StopEcocide.Earth people are joining becoming an Earth Protector in law.

It is a legal trust fund document that has been Apostilled, legalized in almost every jurisdiction in the world. If we sign up and donate, we are helping to fund those small underdeveloped states that are committed to taking this forward.

Founder, Maxime Dücker, on behalf of Ourgoodbrands team has signed up to become an Earth protector.

You can donate as little as USD $5 and legally become an Earth Trustee. The direct consequences of the Ecocide law

Putting together this legal document in the context of StopEcocide.Earth has enabled Polly Higgins to take a team of lawyers and experts into the United Nations, into the assembly of third parties to make representations (last year, 2018).

“This will continue this year, and an action that will grow and improve, as it will become more resourced every year until this is put in place. Once that’s proposed everything chances because actually, it sends a huge messaging into the world.” Polly Higgins

For instance, the insurance companies will no longer insure the dangerous industrial activity – because ultimately this will be criminalised.

The investment world is not going to voluntarily invest in the extraction of fossil fuels.

Banking, the world of finance will no longer put investment into any activities that are dangerous for the planet, that can trigger and cause ecocide.

“We have the draft Ecocide law to put in place and that is very powerful because this can affect great change for the whole of the history of humanity,” Higgins says.

It may sound a rebel alliance against the empire, and that is indeed what it is.

This is an invitation to those rebels out there to come together to an unlikely alliance, maybe a few good funders that can help finance these states take this forward. “It is a key turner and something we know we can move really really fast. In a couple of years, this law being enforced and in place as an international crime.”

This is for all those who care. If you care about this, then I invite you to become an Earth Protector. Sign up, give funds. And the faster we build that part, the faster we can run.

It is unprecedented that civil society comes together to help finance the law that we require to have put in place to safeguard humanity and Earth for future generations.

Why the Ecocide law is ultimately important?

2. Earth defenders are being criminalized. There must be some kind of law missing when those standing up protecting the earth are the ones who are being arrested and criminalized. Whereas those who are causing the harm, the dangerous industrial activity, the CEO’s, the directors, the ministers who are signing off and completely disinterested in that harm, is not being held to account because the actual harm itself is not identified as a crime yet, as ecocide.

3. Giant corporations spend millions on lobbying to block climate change policies. We must get together and stand up against them.

Before she died, she said;

“There are millions who care so much & feel so powerless about the future, and I would love to see them begin to understand the power of this one, simple law to protect the Earth – to realise it’s possible, even straightforward. I wish I could live to see a million Earth protectors standing for it  – because I believe they will”

Polly Higgins was one of the most inspiring figures in the green movement. An amazing woman with determination and vision, who used her legal knowledge to research & push for an “ecocide” law. For one decade she led the campaign for “ecocide” to be recognized as a crime against humanity. She passed away on the 21st of April 2019, by the age of 50 due to terminal cancer. R.I.P Polly Higgins we will keep this fight alive for you. Thank you. How to Start Your Own Bee Farm in Your Backyard Disrupting business in Cambodia with handbags made from recycled materials