Welcome to the future, as regenerative agriculture comes to solve many problems at once. The movement comes with the beauty of letting nature do its work. Here’s a pretty comprehensive guide of its principles and inspiring organisations leading this sustainable practice.

Heading into a new year and decade, I’m sure you have a lot on your mind. Are you concerned with the bee population? Are you frightened by the bushfires all over Australia? Are you sick of our precious water resources being polluted? You might be surprised that agriculture has an immense ability to resolve a lot of these issues. But, it has not quite fully gone mainstream. It comes with a name that you might not be familiar with: regenerative agriculture. Rest assured, I can explain!

What is Regenerative Agriculture?

The effect of practicing regenerative agriculture is that restores soil health. For farmers, this means greater yields, the resiliency of the soils to various stresses (droughts and excess moisture), decreased need for outside input costs (fertilizer and pesticides), and increased profits. For consumers, increases in soil health lead to more nutrient dense foods, a pollinator friendly environment, wildlife habitats, erosion control, pollution run-off control, and carbon sequestration through photosynthesis, thus helping to reverse climate change. In short, it solves all of the world’s problems!

In a lot of ways, we are recovering principles that were dropped following the industrial agriculture revolution and integrating them within the systems that we have developed over the last eighty years. In other words, regenerative agriculture isn’t a rejection of conventional or organic agriculture, but a deeper fulfillment of their systems. Remember that phrase, “listen to your elders?” Yeah, well it turns out, that’s actually true. 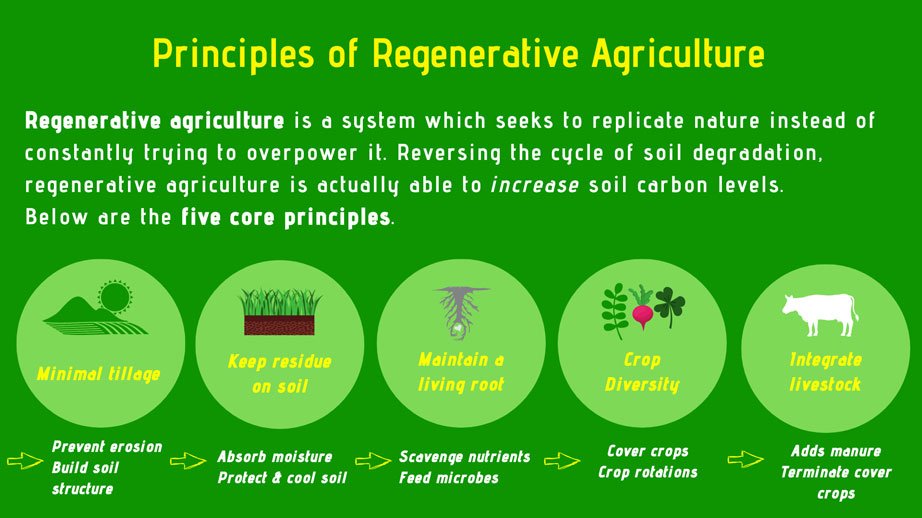 Through the consistent use of these principles, farmers are actually able to build soil organic matter, reaching or surpassing levels existing prior to intense cultivation. Hence, the genesis of the word regenerative. Regenerative advocates make the distinction that regenerative agriculture has an advantage over sustainable agriculture as it truly leaves the landscape “better than it was found.”

Because of the focus on the soil and imitating nature, organic agriculture is not always in line with regenerative principles because many organic farmers solve the problem of nature by tilling the soil, which is one of the “deadly” sins of regenerative agriculture. In order to increase soil organic matter, the best approach is to keep the soil structure intact, while also incorporating other practices such as the utilization of cover crops, rotational grazing, and diverse crop rotations.

On the other side of the spectrum, modern industrial agriculture tends to violate regenerative agriculture through its tendency to overpower nature. While industrial agriculture certainly has its faults, the issue is not so black and white. A number of large-scale producers for decades have already been practicing no-till agriculture, one of regenerative agriculture’s hallmark principles. Building off of this, there has been a movement within industrial agriculture over the last decade or so towards incorporating cover crops into their operation. Cover crops, which are non-cash crops grown either alongside or after the cash crop, are especially attractive to farmers as they tend to decrease farmers’ need for fertilizer and pesticides, leading to greater profits and obvious ecological benefits (such as providing a home for pollinators)! In this manner, cover crops tend to have a slow-building transformative effect on large scale producers, rather than the more radical “epiphany” that many people wish the agricultural system would have. Make no mistake: regenerative agriculture is the way forward. Farmers all over the world are transforming their operations in order to be regenerative. But enough of all this technical information: how can I as a consumer or business owner be regenerative with my spending?

Savory Institute, an organization based in Boulder, Colorado, has created Land to Market, described as the “the world’s first verified regenerative sourcing solution for meat, dairy, wool & leather.” Savory Institute’s Land to Market program “connects conscientious brands, retailers, and consumers directly to supply derived from land that is verified to be regenerating.” Check them out!

Kiss the Ground is a non-profit based in Los Angeles, California with a mission of telling the story of the soils role in mitigating climate change. They do this by educating consumers and companies about regenerative agriculture, helping farmers transition to regenerative agriculture, and training advocates to speak on behalf of the soil (I am personally a graduate of their Soil Advocate training and I highly recommend it!). Kiss the Ground is funded in part by General Mills. Are you interested in being an activist for the soil? Would your company be interested in aligning their supply chains with regenerative suppliers? Find out more on their website!

Grounded Growth is a membership driven company, seeking to connect companies with farmers who will grow ingredients using regenerative principles. This dynamic organization provides education to interested companies about regenerative agriculture and how it not only benefits the environment, but the integrity of their brand. Grounded Growth has a great website which features both their participating brands and their farmers, in case you need some video explanations of what regenerative agriculture looks like in action! General Mills has committed to “advance regenerative agriculture on 1 million acres by 2030.” They are doing this by partnering with different organizations such as The Nature Conservancy, Kiss the Ground, Soil Health Partnership, and by helping transition upwards of 34,000 acres in Montana from conventional-based to organic. To learn more, follow the link!

Carbon Eight, an Australian organization, has formed with the intention of helping Australian farmers transition to regenerative agriculture through philanthropic support of organizations and individuals. This organization was launched in partnership with the documentary 2040.

Indigo, an agricultural tech startup based out of Boston, Massachusetts, has a mission of “harnessing nature to help farmers sustainably feed the planet.” Indigo is trying to reshape the food system by transitioning farmers into regenerative agriculture and marketing their crops based off of nutrient density, rather than treating each crop as a commodity. One of Indigo’s initiatives, the Terraton Challenge, seeks to sequester one teraton (1 trillion metric tons) of carbon, returning carbon atmospheric levels to pre-industrial levels through soil carbon sequestration.

Nori is a carbon dioxide removal marketplace established to reward farmers for their efforts in capturing carbon by using practices such as no-till and cover crops. Individuals and corporations can buy off-setting carbon credits to support farmers while keeping their own carbon footprint in check. Though he didn’t grow up on a farm, Zach has had a passion for agriculture since he was a kid. This initial passion grew further in college as he studied nutrition and was enlightened by the food movement. Wanting to learn for himself, he sought out farmers for answers, eventually taking jobs on farms and as a soil conservationist. Through both study and practical experience, Zach is convinced that regenerative agriculture is a powerful force of change and wants to help make this a reality for farmers and the public. Waste Not, Want Not. How nature can inspire us to live sustainably 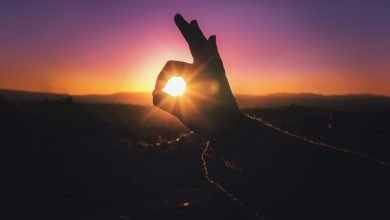