Bees, so humble, and a species seemingly so small and insignificant is actually incredibly important. Bees perform about 80% of all pollination worldwide. A single bee colony can pollinate 300 million flowers each day. Plants rely on bees and, in turn, our survival depends on bees! There’s been a dramatic decline in bee population and we dig a bit deeper into the causes and provide you with data on why bees matter.

Bee Colony Collapse Disorder has been a concern for the past ten years. Cross-pollination of bees is what makes them directly responsible for 70% of fruits, vegetables, seeds and nuts we consume on a daily basis. About 90% of the world’s nutrition are pollinated by bees. This translates into almost $200 billion in global agriculture revenue.

This huge responsibility is accomplished by droves of commercial bees, reared by professional beekeepers for the sole purpose of being transported to farms or orchards to pollinate crops.

Since 2006, these hardworking busy bees have been mysteriously disappearing. This Colony Collapse Disorder has seen on average one-third of commercial bees abandoning their hives. In fact, some beekeepers have been reported that 90% of their bees have simply buzzed off.

What’s causing the Colony Collapse Disorder and death of bees

The Colony Collapse Disorder occurring worldwide is not as big a mystery as the chemical industry claims. Scientists know that bees are dying from a variety of factors, many of these causes are interrelated.

Here are some of the main causes of the decline of bees:

Bees and wildlife need to be able to avoid disturbance and mega-farms leave almost nowhere to hide. Industrial farming is wiping out the bees’ habitat. Bees are dying by the tens of billions.

At high concentrations, such as from these mega-farms, ammonia and other nitrogen emissions cause direct damage to lichens, mosses and other plants, including bleaching and discolouration.

You might think that the fruits and vegetables we eat are the product of natural pollination from wild honeybees that live near farms and agricultural fields, but this is sadly often not the case. In fact, the sale of honey only accounts for a small amount of the profit of the bee farming industry. Instead, every year, more than one million bee colonies are transported all over the United States as different crops come into bloom. Which leads us to the next point. Huge numbers of honey bee colonies are transported around to pollinate crops.

There are widespread concerns this might be contributing to Colony Collapse Disorder, as migratory management and environmental conditions affect lifespan and oxidative stress in honey bees. Most pollination in large-scale agriculture is dependent on managed colonies of a single species, the honey bee Apis mellifera. More than 1 million hives are transported to California each year just to pollinate the almonds, and bees are trucked across the country for various cropping systems. Concerns have been raised about whether such “migratory management” causes bees undue stress. In some colonies, mites, viruses and parasites have been to blame, but many are now looking at a class of insecticides called neonicotinoids. This neurotoxin is used to kill crop-eating insects and pests but also affects the central nervous system of bees when they consume contaminated nectar. And since nectar is brought back to hives, the entire colony can be affected, leading to mass confusion and disorientation.

The primary suspects behind colony collapse disorder are pesticides, especially those used in industrial agriculture, and destructive pests that invade hives and spread disease. Breeding techniques that pursue the perfect strain of honey has led to a lack of genetic diversity in bee populations. Now there’s been conversations in the sector where breeding bees with “clean genes” could help prevent colony collapse. For the new study, the York researchers investigated a positive trait that certain colonies seem to have. Some beehives seem to be generally “cleaner” than others, and worker bees in these colonies have been observed removing the sick and the dead from the hive. These hygienic behaviours have been linked with higher chances of survival for the colony as a whole since the pathogens are likely being taken out too.

“Social immunity is a really important trait that beekeepers try to select in order to breed healthier colonies,” says Professor Amro Zayed, the corresponding author of the study. “Instead of spending a lot of time in the field measuring the hygienic behavior of colonies, we can now try breeding bees with these genetic mutations that predict hygienic behavior.”

What is also contributing to the death of bees are extremely cold and long winters versus global warming are making it hard for bees to adapt to climate change. On the other hand, bees are exposed to less variable nectar in the fields which has a huge impact on their nutrition deficit.

The bottom line is that we know humans are largely responsible for the two most prominent causes: pesticides and habitat loss. Why we must save the bees

Some experts say that if bees disappear, we would only have 4 years left to live.

If the trend continues, entire food chains may be at risk. For example, bees have cross-pollinated almond plants. The hulls of these nuts are used as feed for farm cattle and chicken. Fewer bees mean fewer almonds, which could mean declining livestock, and ultimately less milk, cheese, eggs and meat production. Not to mention almonds are used in cereal, baking and many other food products. But we don’t even need to go so far: the vanishing of alfalfa field which is used to harvest hay for cattle will have a huge impact on beef and dairy cows. Bees also pollinate coffee arabica, whose seeds we grind for coffee.

Without bees, our diets would consist of mostly corn, wheat and rice, as they are wind-pollinated plants. Cotton, which is the fibre used in about 35% of our clothing, will also disappear without bees. Over the past 50 years, agriculture is reliant on insect pollinators – which has increased by 300%

The ultimate guide on how can you save the bees

The Attenborough effect: How to make your garden more eco-friendly

How can you help to save the bees? Here’s a pretty comprehensive guide to saving the bees with the 20+ brands that are positively impacting the world of bees.

What are you doing to contribute a better life for our bees? Comment below, and we will make it happen! 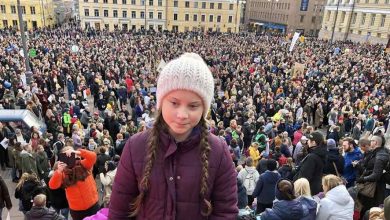 Greta Thunberg leader of a worldwide revolution for climate change 10 Simple ideas for your next DIY repurposed project