China’s waste ban became a reality January 2018, which seems to have created a waste and recycling crisis. Western countries have been the most affected and are exploring potential solutions to manage their waste. But what they might have not realised is about all the opportunities for businesses and governments to create a more circular economy. China’s waste ban is also a proof that the world has not another option but to go sustainable!

Today we would like to give you a different approach to what it is happening with China’s plastic ban.

Ourgoodbrands is all about good news, and while this might look like “the waste crisis”, it seems for us an opportunity of the Governments to put hands-up and start to create laws where businesses will have to go sustainable.

The decision of China banning to import our waste has forced us already to ask ourselves about possible solutions.

Some consumers have taken the revolution into their own hands due to the inaction of the Governments, like this:

But… did you wonder why the Queen of England banned the plastic bags a month ago? Or why this town in the UK, called Cornwall, has decided to become single-use plastic free by 2020?

Imagine the scenario… in a couple of years, all hospitality businesses would have no chance to serve to take away food in plastic disposables, or refusable coffee-cups, or the horrible plastic straws! And while this happens, people will have to bring their own. Whether it is bamboo straws, their Keep Cup for the coffee, the Kleen Kanteen water bottle and even their wood cutlery.

The reality is that China’s with our without its plastic ban, single-use plastics create unnecessary waste with negative impacts on our communities. From Europe, seems that the European Commission has started to embrace the crisis and some comments have been made to see this as an opportunity to implement a cleaner and circular economy.

To start, the Commission’s Plastics Strategy announced the intentions to make all plastic packaging recyclable or even reusable by 2030. This inevitably will create jobs and a big investment from Europe to be able to sort and recycle the plastic waste. When the commission presented the strategy, the Vice President Jyrki Katainen explained “Since we mostly export, which does not make any sense in economic or sustainability terms. We are throwing away 95 percent of the value of plastic packages and only 5 percent is retained in our economy.”

Some brands such as Think Love Live or Crystal Flow Ocean are already using recycled plastic to produce their bikinis. Another example is EcoALF, which their high-quality clothing.

During our interview with Anna Crommelin, owner of the Australian bikini brand Think Love Live, she mentions:

“The fibre is sourced from the U.S., where they crush the plastic and turn it into pallets. Then they send it to a factory in China, which then becomes it into yarn, the final material that can be made into bikinis. So it is a complicated process and, I guess because the race of fast fashion and the loss of manufacturing in western countries, all that sort of fibre is still being sent to China to turn into yarn. And China is doing a fantastic job, but we would love to have the ability to do it here in Australia, and the U.S. would also want the same! So hopefully, there’s innovation down the track.” China is the only industry that seems to have the capacity to create the yarn from the recycled plastic bottles, which would be the polyester the primary material swimwear and most active wear.

This is just an example of this complex industry, and how businesses could use recycled plastic instead of produce new plastic for them to get the polyester.

So basically, the fact that China doesn’t longer accept our waste, makes us rethink our industry models. We strongly believe that soon we will start hearing about how Europe will be interested in building processing plants. China has been for decades the largest importing waste country. China was in taking over 7.4 million tonnes of waste from all over the world only in 2016.

The reason for China’s banning the import of waste was because, as you can imagine, the large amounts of dirt and hazardous waste were seriously polluting China. Sources of the SBS say that “China is generating more and more of its own garbage” where “Two-thirds of Chinese cities are surrounded by mountains of garbage. The quality of the waste can be lower than those from foreign countries and much of it ends up in landfill or incinerators.”

The country’s recycling capacity will be focused instead on dealing with its own mounting trash problem.

China’s waste ban includes from being imported by other countries a total of 24 categories of solid waste, materials such as unsorted paper and the low-grade polyethene terephthalate used in plastic bottles, as well as textiles.

And why countries used to import their trash to China?

Because it is cheaper than other countries (like India, Pakistan or Southeast Asia) due that the waste is transported in ships coming from Europe or US that would otherwise be empty. At the same time, collecting the trash from overseas has been another source of income, especially for Chinese investors. It is not only an easy way for them to launder money from other businesses but also because the industry in the country was ready to reproduce these plastics.

With its cheap labour, they are capable of doing the entire process, from the separation into different plastic resins, clean the waste, make the pellets ready to be reshaped into new products, or as mentioned earlier, even do the yarn for the clothing used in polyester. All start and ended in China, and then back to business in the West. 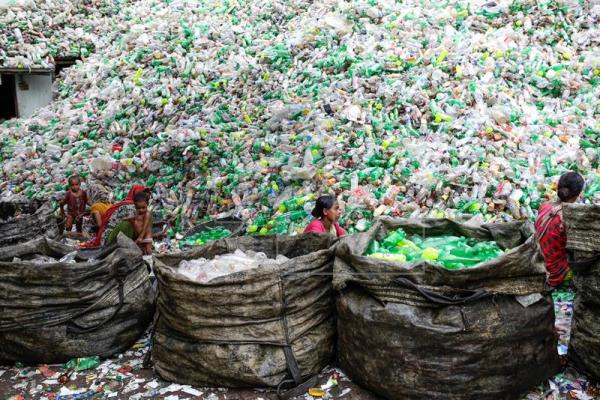 Now governments are looking at other countries to export their waste, which is a bad decision because it’s most likely it would end in landfills. As an example, India has troubles managing their own waste and doesn’t have industries put in place to transform the waste in another form of raw material that could be reused to create new products. Same with Southeast Asia: Indonesia, Vietnam or Malaysia accepting the global waste will not be enough to make up the difference.

When it comes to Europe, Bulgaria could be also a focus from the neighbour countries. There are reports that show that in 2014 Bulgaria landfilled 82 percent of its waste, due that the country has very low taxes on burying garbage.

“They could become the landfill of Europe, because waste always finds the cheapest way” said Ella Stengler, director of waste-to-energy plants federation CEWEP.

Meanwhile, you might also read news about the intentions of incinerating the waste – for which we hope citizens will not allow this to happen. This would definitely be a catastrophic environmental and health disaster.

To date, the world has produced more than 8 billion tonnes of plastic, from which only 9 percent has been recycled. The remaining has been sent to landfill sites or dumped in the oceans.

What can we do about this “waste crisis”?

The change starts with us, purchasing more sustainable brands between the options available in the market. Also important, reading the labels.

A good way of becoming an activist consumer is to start bringing your own takeaway equipment. Slowly businesses will also notice the affluence of people becoming more conscious; if you demand better, they will offer it.

Also, it is overtime more common to see supermarkets to introduce plastic-free aisles where bulk purchasing is becoming an option. In fact, some remote supermarkets are entirely zero-waste, responding to the demand of the people who have already joined this lifestyle as a way of living.

To start with, we would be thrilled to see hundreds of communities across the globe getting inspired by towns like Cornwall. Some options for the hospitality businesses are to substitute plastic for another kind of packaging such as the compostable Doremi.

It is a fact that the solutions are out there, it’s just a matter of us choosing well, demanding better, asking the right questions, and that will push the Governments to implement sustainability as a requirement for all businesses.

Make India Green again: How a nation can plant 66 million trees in 12 hours